VicNoTill started in 2002 to further explore and test no-till and zero-till farming systems in Victoria. The organisation of ‘farmers helping farmers’ has remained at the forefront of new innovations in farming since that time, evolving and growing to incorporate regenerative farming systems that produce nutrient-rich food and fibre. One thing that has remained constant throughout the history of VicNoTill is that we bring together farmers with a passion and understanding that improving their soils is better for their bottom line, better for their future generations and better for the long-term future of farming.

“It’s been exciting to see the transition of so many farmers into zero-till systems but even more dramatic is seeing them take their soils even further through things like companion crops, livestock, cover cropping and diversity. Being part of VicNoTill helps us all learn faster about what works and what doesn’t because the farmers in this network have such a broad and varied knowledge which they’re willing to share.” Ross Watson, Mallee Victoria 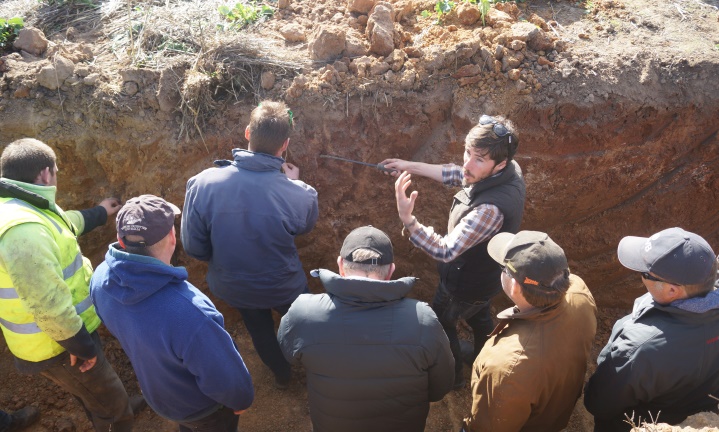 No-till farming is not new technology to the agricultural landscape. It’s origins date back to the 1940s with Edward H. Faulkner, who questioned the traditional farming method of ploughing in his book, the Plowman’s Folly. In his opening paragraph Faulkner wrote:

“The truth is that no one has ever advanced a scientific reason for plowing. Many learned teachers have bad embarrassing moments before classes of students demanding to be shown why it would not be better to introduce all organic matter into the surface of the soil than to bury it, as is done by the plow.”

These ideas made farmers rethink their approach and spawned the zero-tillage and controlled-traffic farming systems we use today.

What is no-till farming?

No-tillage or zero tillage is a farming system in which  seeds are directly placed into untilled soil which has retained the previous crop residues. It is also referred to as no-till. Special no-till seeding equipment with discs (low disturbance) or narrow tine coulters (higher disturbance) open a narrow slot into the residue covered soil which is only wide enough to put the seeds into the ground and cover them with soil.

The aim is to move as little soil as possible in order not to bring weed seeds to the surface and not stimulating them to germinate. No other soil tillage operation is done. The residues from the previous crops will remain largely undisturbed at the soil surface as mulch.

One of the biggest advantages of no-till farming is its impact on soil health creating more productive soils and profitable farms. When soil is tilled by machinery it is exposed to air, organic matter is lost and trapped carbon that is vital for soil health gets lost into the atmosphere. But no-till farming helps retain organic matter, nutrients and water within the soil, with the overall result being healthier soil structure for more prolific crops. With such unpredictable seasons and our history of drought in Victoria and across Australia, reduced tillage farming can be enormously beneficial.

Crop residues left on the soil surface protect the soil from water and wind erosion and reduce the risk of sealing and nutrient surface run-off. Many of the advantages, such as better soil structure and water-holding capacity and increased microbial activity, are based on increases in the  amount of soil organic matter.

When the soil is not disturbed, the pores and aggregates formed by biological processes also remain stable. Moreover, there are savings on labour, fuel and other operational costs.

The amount of weeds and their type can be different than in conventional tillage. In no-till systems weed seeds stay near the soil surface, where they are subject to e.g. decomposition or predation. Over time, the seed bank will be decreased.

Research has found that the seedbed is a biologically active and dynamic layer that has a profound influence on the establishment, growth and final production of crops. The seedbed micro-environment supplies the first five of six factors critical to plant growth.

The interaction between all of these factors determines the optimum growth of the plant. Reduction or loss of one or more of these factors can limit or suppress plant growth. Growers have a degree of control over a number of specific parameters in the seedbed including air-filled porosity, seedbed aggregate size and soil strength. These are controlled through maximum residue retention, reduced disturbance, optimum machinery set-up and reduced wheel traffic.

Regenerative agriculture: regenerative agriculture is a system of farming principles and practices that seeks to rehabilitate and enhance the entire ecosystem of the farm by placing a heavy premium on soil health with attention also paid to water management, fertiliser use, and more. It is a method of farming that improves the resources it uses, rather than destroying or depleting them. A large number of VicNoTill members have taken their systems further by incorporating regenerative principles and practices into their cropping and livestock farms.

Cover cropping and plant diversity:  growing multi species crops for the protection and enrichment of the soil. Different plants release different carbohydrates (sugars) through their roots, and various microbes feed on these carbs and return all sorts of different nutrients back to the plant and the soil. By increasing the plant diversity of their fields, farmers help create rich, varied, and nutrient-dense soils that lead to more productive yields.

What is Controlled Traffic Farming (CTF)?

The crop zone should be soft, uncompacted soil for plant establishment and root growth.

Wheel tracks should be hard and dry to give traction efficiency (to reduce fuel) and access after rain to provide operational timeliness. They should be wide for safety and stability and tyres as narrow as possible to maximise crop area.

The inter-row sowing of wider row crops (often summer crops) can be better managed for weeds with CTF, because CTF does not interfere with the inter-row. These zones are defined accurately (to a few cm) and can be easily used for inter-row sowing using an offset hitch or minor adjustments to the guidance system.

For more information about no-till and regenerative farming systems in Australia, get in touch with us at VicNoTill. Please consider joining our farming association and take advantage of member benefits, such as free admission to our VicNoTill events and demonstrations.